THESE DAYS AINT THAT GOOD.

mmmmms..
IDK[:
after reading xuan&wei's blogg. ii felt kinda sad. not for them ii mean.
just felt that frenship is so vulnerable. and yes, all of us understand the meaning of people coming and leaving. it's just such a sucky idea that the above had came to. how much ii hope, or rather, we hope..nothing is gonna turn in wise of our way, our idea. ii'm trying to smile through the saddened heart of mine.Y [: seriously, ii'm trying.


we swam and played water games.


it was like uber uber fun , ii swear.
we played pushing games and stuffs.


; ordered macs.
;some pep went to watch the ring two in the "theater room" (she actually had had a projector in her hus.arghs)
;slacked in the living room.
;everybody went in to watch 'the ring two'
;shouted and had loads of fun.
; the guys were leaving , initially.
; decided to leave together.
; blackout! wrong switch was pressed.
; electricity was resumed.
; back to each own hut!


it's such a pity that they are moving alr. awwws. wells.. stay tune, pictures coming up :D


had got a grey skinny which turned out to be a size smaller. ): amanda is changing it for me. thanks lovely, :D.


and ii found out..from ruiwei's blog..
that she's connected to ruijie and rui xian.
like omigud.
no wonder. hahas.
previously, ii had always thought that ruixian's name was rui wei.GEES.


ii missing a truckload of people, currently.
ii miss dexter.LOLs.and without the slightest notion why ii do miss hims all of a sudden.
& my heart, or rather..ii'm feeling weird. veryys emotional all of a sudden.


THANKS FOR TAGGING PEOPLE :D
COME, and dont ever leave.
ii hate this.
odium.
people we've met ,
beautiful people,
touch and go.
ii dint even know who uu were.
ii never had a chance to.
tears were held back.
emotional periods are back.
for revenge ;
with regrets.
that hardcore pain in there,
yet, not by the affairs of heart.
`MISSCROSSES.ii never knew uu.
Posted by Jolene Crosses at 7/30/2007 08:41:00 PM No comments: 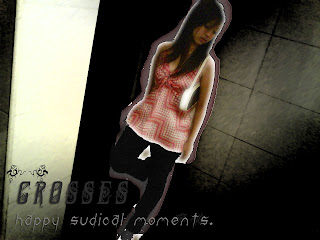