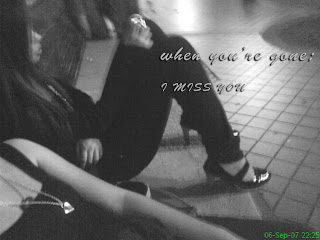 i've never felt this way before
everything that i do reminds me of you
and the clothes you left, they lie on the floor
and they smell just like you, i love the things that you do

we were made for each other
out here forever
i know we were, yeah
all i ever wanted was for you to know
everything i'd do, i'd give my heart and soul
i can hardly breathe i need to feel you here with me, yeah

this song is heartfelt.


the pain was so much, last night and this morning.


ii couldnt explain why, but it was there. the feeling of losing frens, is definately unbearable. ii was damn terrible.


ii tried to put up with a false front and masked myself behind a happy :) .


but ii guess it wasnt a good mask, tored, and known.


thanks people for asking me to cheer up . ii dint want to appear sad. ii tot ii had a happyy face enough today.


during recess, ii went to the counselling room ,with the initaite thought of just slacking there.


ii told mr surjuno ii wanted counselling. & for the first time he talked to me.


thinking through all that had happened, tears flowed out. this time round, OUT. not backwards anymore. it was so damn uncontrollable. still, ii still couldnt tell anyone about whad had happened. ii cant.


though ii dint tokk much with mr NONO. ii felt so much alrights after crying.


the rest of the day was quite fine, however, with my emotions unsettled.


my breathing pace abnormal, ii feel so much like dying.


it's a much better way to relieve my stress ii guess.

oblivious chumminess made us dead.
collapsed in the throe of agony.
ignorance aint bliss.
dimunitive contact,
made my day a bad.
Posted by Jolene Crosses at 9/18/2007 09:39:00 PM No comments: 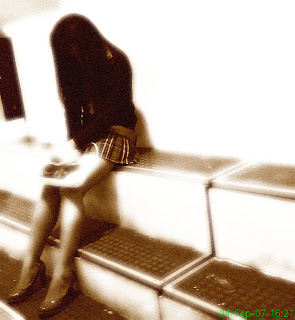 this is how ii'm feeling right now.
it's like perhaps, you guys may think that ii've been such a bitch , such a slut.
whaddever, sometimes, ii think so too.
ii cant change your mentality of me .
but hell yae, i cant even remb stuffs that ii did.
ii've been terrible ii noe.
call me names, and yae, I CARE.

ii'm damn screwed. ii noe.
ii'm alone. yes ii'm.
ii shall retreat . ii will.
tears flowing backwards,
and ii'm sure.
not in a clear state, ii was.
death penalty was sentenced.
to silence me as a killer.